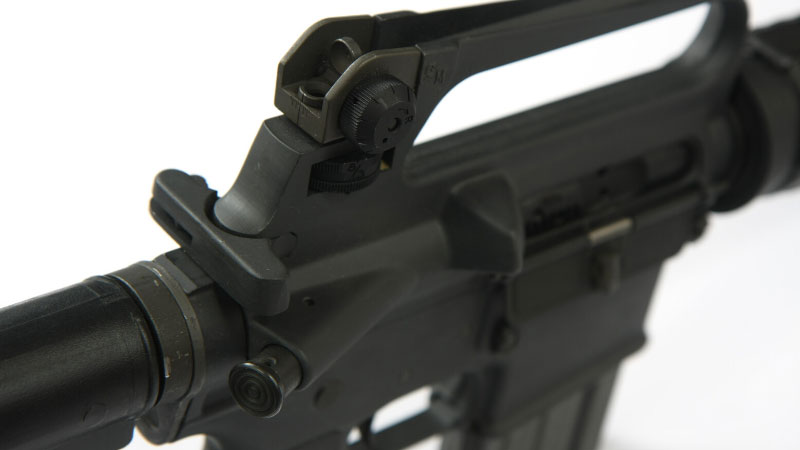 We all have heard about the Stephen Paddock shooting and killing 59 and more civilians in the non-stop open fire shooting incident, haven’t we? It’s not yet confirmed if it was an automatic gun or not, although the hypothesis is that it was one.

Automatic weapons are suitable to be banned by the law or, even if used, should be strictly supervised. Allowing automatic guns can be very dangerous and gives the chance of some chaotic deadly massacre. It is a weapon that is put alongside the machine guns.

Just by holding the trigger, an automatic rifle can outpour bullets in a life-threatening notion. If we talk about the semi-automatic rifles, on the other hand, they fire a limited amount of ammunition with a trigger pull.

In that sense, the ratio between the automatic rifle and the semi-automatic rifle ends up being pretty impressive such as hundreds of bullet per minute, whereas only dozens in the same time frame, respectively.

AR-15 is known as a semi-automatic rifle that has been in production since 1959. Ever since ArmaLite has sold all its trademark items to the Colt. The “AR” from the name has always been mistaken as either “assault rifle” or “automatic rifle,” but let us inform you that the word is originally the abbreviation of “ArmaLite Rifle.”

To design the AR-15 rifle, you need large automatic equipment, which was at that time provided by the Computer Numerical Control. The gun is designed in a way that a considerable amount of synthetic materials and aluminum alloys are required in the manufacture.

It is air-cooled and gas-operated, has a bolt that rotates, and has a linear recoil design. The AR-15 has a 5.56x45mm ammo. This kind of rifle is often known as a “Modular Weapon System.” They are easy to prepare, repair, and change just by using fundamental tools on a clean horizontal space.

The upper receiver of the AR-15 embodies:

Whereas the lower receiver of the AR-15 integrates:

As it has all the damage controlling the system, the lower receiver is the fire controlling unit. There is a stoner system in the AR-15 rifle which offers a much-maligned design that helps with the disciplined movements of the operating system, which lets recoil forces move straight to the rear.

The rifle is known to be lightweight. All the mechanical parts that are controlling the system uses high-pressure gas, which helps reduce the overall weight of the rifle.

Recoil spring that is found in the stock, because of the straight-line recoil design that AR-15 owns, assists the recoil buffer and the operating spring, which has a binary function.

In the course of automatic firing, the muzzle climb reduces because of the stock being aligned. So as the recoil, without any hesitation, shifts to the aiming point, the possibility of faster shots increases, and also the over-exhaustion can be reduced.

The main reason why firearms are incorrectly interpreted as a political subject is that the designs of the semi-automatic rifles or pistols were innovated in the late 19th century, and many first world countries have bought them during the 20th century. These have also been called "weapons of war" by people who were keen to ban them.

This automatic firearm is can have an endless firing session with just one trigger pull. It has ammo in the magazine's chambers. This sort of weapon does not operate manually.

While the firing takes place, it will remove the cartridge case itself that is inserted in the room and exude it from the sides, and also load another new cartridge in the chamber.

Related article you can check

Converting AR-15 into an Automatic Rifle

Federal law has announced that automatic weapons that were manufactured before 1986 are somehow legal because congress made through the firearm owner's protection act with flying colors. However, it's illegal for civilians to purchase automatic weapons for personal use.

Although if you wish to turn your AR-15 into an automatic rifle still, it's possible but not entirely legally acceptable. This activity would require experienced and professional machinist's precision and supervision.

To successfully make this operation work, you need to be well-known about the tools you are using accompanied by machine shop of some professional quality and appropriate equipment as well.

Good thing that all these requirements effectively excludes all the people who are engaging in unlawful doings, because turning An AR-15 into automatic rifle isn’t just as easy as it may sound.

What people do wrong is that they firstly mess with the trigger sear. Reasons why professionals have come up with the solution to create a rifle which will have an auto sear, a blot which will make sure that the rifle only fires when it is locked.

Not having this option can be dangerous and life-threatening as well, considering it might do severe injuries to the one using the gun as well as eradicate the rifle. There should be a limited amount of receiver metal as that's where they are supposed to fit, to fit an auto-sear. Removing it would need the help of a milling machine.

If you own a semi-automatic gun already, owning a bipod is a necessity considering it is one of the essential accessories while using a firearm. So let us introduce you to the Harris bipod for AR-15.

This Harris unit is known as one of the best bipods for AR-15 at the moment. The company that has been building the bipods and are at the top for many years now. Its  designed well, and this irregular model can fit at any Picatinny rail.

Legs of the bipod are designed for such comfort; they can be stretched from six to nine inches. Also, when not needed can be situated directly below your rifle, and we must mention that it has spring-loaded legs that offer extreme flexibility and adaptability.

To have a comfortable firing experience with your rifle, Harris bipod is the one you should purchase.

So now, as you are familiar with the automatic rifles and their usage along with their rules and regulations. We hope you will take all kinds of safety measures and stand by the law, not going haywire with the interest of automatic rifles.

It's a very sensitive tool that needs processes with care. However, if you are ready enough to turn your AR-15 into an automatic gun, we hope our article helps and provides you all the needed information.

5 Reasons Why You Will Buy an American Made Axe?
How Does a Blood Tracking Light Work?
Survival Kit Must Haves: A Definitive Guide
How to Attach a Bipod to a Sling Swivel?
How to Install a Bipod on an AR15?
How to Mount a Bipod without a Stud?
How to Use a Bipod: a Beginner’s Guide