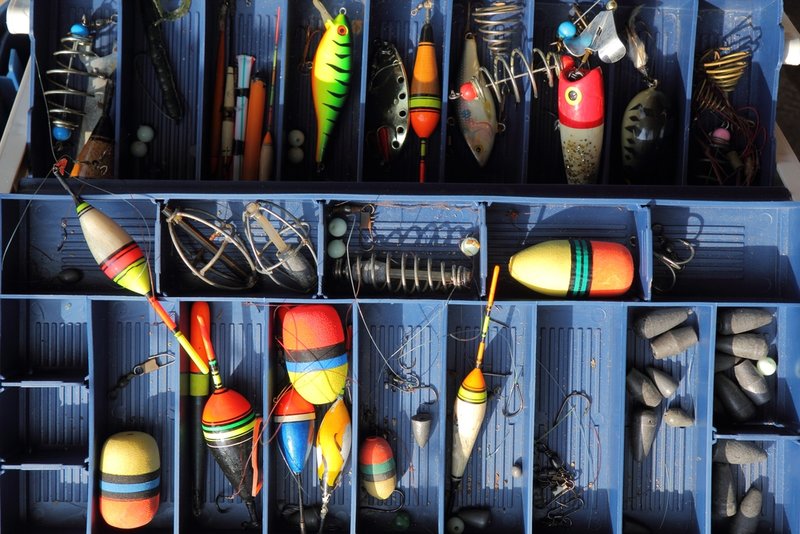 Fishing Lures: Things You Should Know About

In terms of sport fishing, a lure is an object, often designed to resemble fish prey, equipped with one or many hooks that is used to catch fish. The lure is attached to the end of the fishing line and is then thrown out into the water and pulled back to attract fish.

An exception is the fly lure, which either floats on water surface, slowly sinks or floats underwater, based on real behavior of insect being resembled. There are several types of fishing lures:

The makeup of a jig usually consists of a lead sinker with a hook molded into it. There is then some sort of body on the shank of the hook. The jig is very versatile and can be used in both salt water as well as fresh water.

Many species are attracted to the lure which has made it popular amongst anglers for years.

The head of a jig can consists of many different shapes and colors along with different features. The most common is the round head, but others include fish head shaped, coned shaped, or anything someone can think up. These heads come in many different weights usually ranging from 1/64 ounces to 1 ounce.

They also can be found in a wide array of colors and patterns. The hooks also vary. These variances can be on the hook type, color, angle of the hook or the material of the hook. Some jig heads even offer a weed guard.

There is a wide array of bodies for jigs. The most common that can be found is made out of rubber or silicon. These come in many shapes can be a grub, frog shaped, fish shaped, paddle tail, lizards, or different bugs. The colors of these can range from bright yellow to a transparent brown with silver and red flakes.

Another body that is often used is the combination of feathers, fur, rubber skirts, and other materials.

A “wobbler” is a larger fishing lure, designed to resemble larger fishes than the jig (fishing)|jig. As the name signifies, it makes wobbling movements that are caused by the mouth dish that causes bad slipstream shapes. The typical build of a wobbler consists of:

A spinner is in terms of sport fishing, a lure designed to make noise underwater in order to catch the fishes’ attention instead of mimicking food. The build of a spinner consists of a metal pin with a dish around it which will make noise when water is flowing by due to the fishing line being reeled in, almost like a fan or turbine.

Below the dish metal weighs are placed in order to make the lure sink and to keep the dish from getting stuck in the hook which is placed at the end of the pin. The hook, which is a three-hooked version, as seen on the wobbler, is often camouflaged in a soft material like feathers.

A fly lure or Fly, or “pattern”, in terms of sport fishing and fly fishing, is an artificial lure tied, most commonly, with thread, feathers, and fur, but may also include, lead (for weight), ribbon, tinsel, beads and other assorted materials. Fly tying is becoming common practice in fly fishing.

Many fly fishers tie their own flies, either following patterns in books, natural insect examples, or using their own imagination. The technique involves attaching small pieces of feathers, animal fur and other materials on a hook in order to make it attractive to fish.

This is made by wrapping thread tightly around the hook and tying on the desired materials. Generally, fly patterns are considered either “imitations” or “attractors.” Imitations seek to deceive fish through the life-like imitation of insects on which the fish may feed.

Attractors, which are often brightly colored, seek to draw a strike by arousing a response in the fish unrelated to feeding, or so it is thought. Famous attractors are the Stimulator, Royal Wulff, and Green Weenie flies. There are four main categories of flies: dry fly, wet fly,streamer fly and nymph .

A dry fly resembles an insect floating on the water surface. Dry flies can also imitate mice, frogs, and snakes.

A dry fly is often tied on a light hook so it can float easily. Dry flies can be tied to imitate insects on the water, such as Pale Morning Duns, or to attract fish to rise without imitating any one specific insect, such as a Royal Wulff or Adams dry fly. Traditional dry flies have a few basic parts, tail, body, wing, hackle, and head.

Floatation of the fly can be achieved in a variety of ways.

Traditional dry flies use the surface tension of water to float. The fly will ride on the hackle and tail, and in some cases the hook point will not break through the surface. Closed-cell foam can be used in the construction or sometimes a CDC feathers, to hold molecules of air. Some dry flies have to be oiled with special dry fly floatant before presentation to further enhance the floatation.

Fishing technique with dry flies is what makes fly fishing so easily distinguishable. In order for the dry fly to float tantalizingly on the water surface, it may require periodic drying after it is pulled out of the water before another round of presentation.

This is accomplished by several rapid strokes or whips of the airborne fly line, called “false casting”, in the air. Another method is squishing the dry fly in amadou to suck out the absorbed water in the dry fly.

Also, several varieties of artificial floatant are available, which are applied to the fly in order to boost water repellency and buoyancy. Gasoline and other toxic materials were once used as floatant, but are now obsolete and have been replaced by more ecologically friendly, non-toxic substances.

Dry flies can be fished upstream or downstream. Casting upstream generally keeps the angler out of the view of the fish while casting downstream may be easier to get at productive holes.

A wet fly resembles an insect under the water surface. Wet flies can imitate aquatic insects, drowned insects, or the larval stages of aquatic insects swimming to the surface to hatch. Wet flies are traditionally tied with a tail, body, wings, and soft hackle.

A wet fly is traditionally fished in a down and across swing – the fly line is cast across the stream and the current carries it in a downstream arc until the line is directly downstream of the fisherman – “on the dangle”. In slow pools on a large river the line may be retrived slowly by a figure of eight retrieve (coiling the line in the palm of the hand). On still water it is usually moved by stripping or figure of eight.

A streamer fly or streamer can be used to mimic injured fish. Streamers can be used to catch predatory fish of almost any size. Fish will bite streamers out of aggression while protecting spawning areas, out of curiosity, or when feeding.

The fishing technique with a streamer is much the same as with a spoon lure.

Casting across and downstream is the traditional presentation. Retrieves can be fast or slow and erratic to imitate an injured fish.

A nymph resembles an insect or stage of insect living underwater. Leeches, mayfly nymphs, caddis fly larva, and diptera can all be imitated by nymphs. Normally a nymph is tied on a heavier hook, sometimes with an added weight in the body or head to keep it underwater during presentation.

Nymphs can be fished successfully upstream or down. A large percentage of what fish eat is found living underwater and imitated by nymphs.

Certain fly lures such as streamers may be used with a normal sport fishing rod, but a special and much softer fly fishing rod is required for most fly fishing. See fly fishing for details on the procedure of casting a fly.