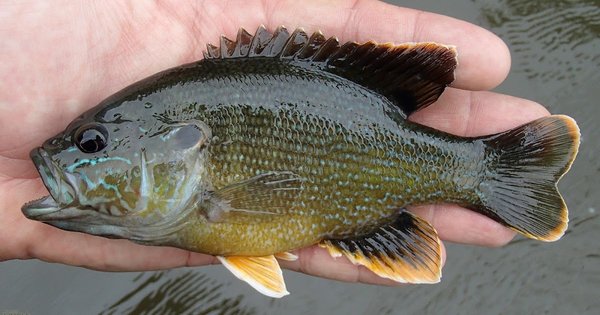 The green sunfish, like warmouth, has a large mouth and a heavy, black bass body shape. The body is dark green, almost blue, dorsally, fading to lighter green on the sides, and yellow to white ventrally. Faint vertical bars are apparent on the sides. Some scales have turquoise spots. Lepomis, the generic name, is Greek and means “scaled gill cover.” The species epithet cyanellus is also Greek and means “blue.”

Due to their propensity to overpopulate and so become stunted, green sunfish rarely reach a desirable size for angling. The largest reported specimen in Texas to date was 1.22 pounds.

The green sunfish is a very versatile species, able to tolerate a wide range of environmental conditions, and tends to do very well when competing with other sunfish is minimal. Its ability to tolerate environmental extremes makes it ideal for survival in prairie streams where conditions are not stable, and it is often the first sunfish species to repopulate depleted areas. Green sunfish nest in shallow water colonies where nests are often closely packed.

Gravel or rocky bottom sites are usually preferred for nest building. Spawning occurs in late spring, when water temperatures rise above 70°F, and may continue throughout the summer. Hybridization with other sunfish species is very common. Males aggressively defend their nests for 6-7 days after eggs are deposited, at which time fry are usually free-swimming. Because of their enormous reproductive potential, green sunfish often overpopulate small lakes and ponds. Adults feed on insects and small fish.

Originally the distribution of green sunfish appears to have been limited to the central plains west of the Appalachian Mountains and east of the Rocky Mountains, including northeastern Mexico. However, due to introductions, the species has become nearly ubiquitous in the United States with the exception of Florida and parts of the northwest. Green sunfish are found throughout Texas