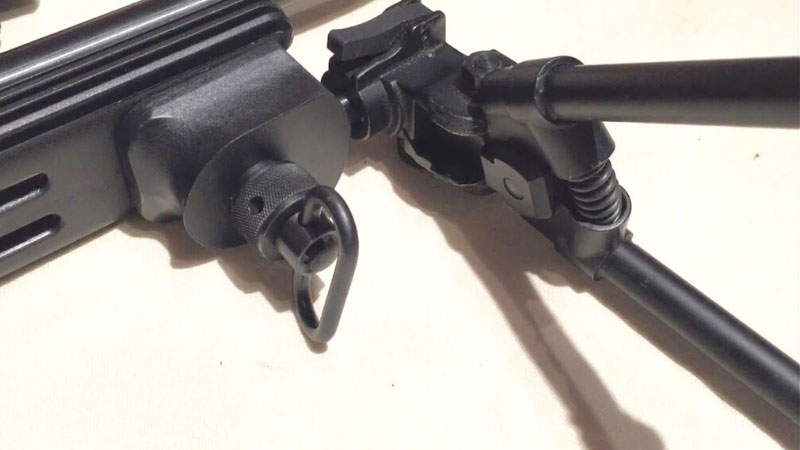 Bipod is an essential tool for shooters and hunters. It is mounted on a rifle for better accuracy and perfect shots. Bipod also improves the stability and steadiness of shooting, no matter which position is tried.

Attachment of sling swivel makes shots precise and well-defined. Ultimately, it is the basis of selecting the best rifle bipod for you.

What Is a Sling Swivel?

A sling swivel is the base point or a fixture point for attachment between rifles and bipods. It can be mounted to the rifle guns with the help of wood and machine screws by connecting with the stock or an adapter.

Sling is usually made of leather, but there may be nylon and biomethane slings available. The most suitable material for slings is biomethane because it maintains shooting stability, preventing any form of slippage.

Heavy and thick slings are not ideal for professionals and hunters; hence, the material plays a vital role in the shooting.

Importance of a Sling Swivel

A sling swivel serves multiple purposes, out of which, proper attachment of a bipod to rifles is the main one.

The rifle sling can be used to shoot better in various ways. A sling is the most convenient option for shooters, mainly because it is attached to the rifle always. It can be used by setting it at a given length and leaving it fully mounted to the rifle. This is a plus point for both prone and sitting position shooting.

Hunters meanwhile prefer putting the support arm in the middle of the sling and the rifle. This helps the sling to get pulled to the shoulder tightly and is a great technique to use in field hunting.

A sling raises the shooting accuracy if the shooter can load into the sling by creating adequate strength. For this purpose, a sling should be necessarily equipped with permanent adjustment points.

Only with this feature, the hunter will achieve perfect shots, and no missed targets will occur. Therefore, using precise adjustments, a sling swivel helps reach accurate shots.

Attachment of Bipod to Sling Swivel

Attaching a bipod to a sling swivel requires multiple steps. Before starting the attachment, it should be pointed out if the rifle already possesses a sling swivel or not. Without a sling swivel already present in the rifle, the process gets a little complicated. In this case, the swivel needs to be attached at first.

Wood or machine screws or more commonly adapters are required for attaching a sling swivel to a bipod.

An adapter is sold individually, and before the purchase, it should be checked whether the adapter fits above or below the swivel. The adapter comes with a rail for the attachment of the swivel. This rail supplies a mounting point for the bipod. At the same time, the rail potentiates the action of the sling swivel.

Before starting the drilling, the gun needs to be unloaded at first. The procedure also requires a drill bit, liquid nails, clamp, and a level in the later step. Aim of the drill bit is to form two holes in the stock portion of the gun.

The level plays a role in proper positioning while the nails are used in the case of drilling. The clamp is responsible for holding the gun in place at the time of drilling the holes. Finally, the bipod is placed on a soft surface for better absorption of the recoil.

When drilling is complete, it is better to try a few practice shots in the field. This will ensure that there are no errors formed, and the entire procedure has gone smoothly. In this way, a bipod can be easily attached to the sling swivel.

Bringing to the end, it can be said that attaching a bipod to a sling swivel is not a difficult task if specific steps are followed.

Proper attachment of sling to a bipod ensures better accuracy and shooting stability. So, it is essential to follow the necessary steps to attach it properly. In this way, precise shots can be easily achieved with a sling swivel.

5 Reasons Why You Will Buy an American Made Axe?
How Does a Blood Tracking Light Work?
Survival Kit Must Haves: A Definitive Guide
Can You Convert an AR-15 into an Automatic Rifle?
How to Install a Bipod on an AR15?
How to Mount a Bipod without a Stud?
How to Use a Bipod: a Beginner’s Guide