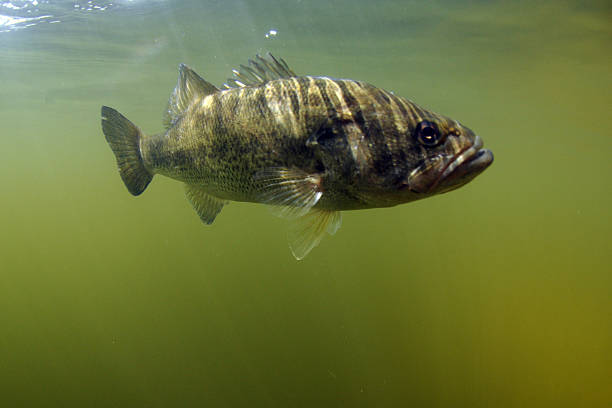 Both are usually green with dark blotches that form a horizontal stripe along the middle of the fish on either side. The underside ranges in color from light green to almost white.

The dorsal fin is almost divided, with the anterior portion containing 9 spines and the posterior portion containing 12-13 soft rays. Largemouth bass may be distinguished from other black basses in that the upper jaw reaches far beyond the rear margin of the eye. Micropterus is Greek, meaning “small fin” [see Guadalupe bass for further explanation].

Salmoides is from the Greek salmo, meaning “trout”, and refers to the fact that largemouth bass have been called “trout” in some southern states.

Because of the strong interest in largemouth bass fishing, there are hundreds of bass angling clubs in Texas devoted to fishing and conservation. A 1995 survey indicated the rate at which 10-pound bass are caught in Texas is over 13 times the rate in Florida, a state renowned for its bass fishing.

Over the last sixty years only one state, California, has reported the capture of bass larger than those reported from Texas. The state record fish was captured from Lake Fork in 1992 and weighed 18.18 pounds; length was 25.5 inches.

In Texas spawning begins in the spring when water temperatures reach about 60°F. This could occur as early as February or as late as May, depending one where one is in the state. Largemouth bass prefer to nest in quieter, more vegetated water than other black bass, but will use any substrate besides soft mud, including submerged logs. Nests are usually built in two to eight feet of water. As in Guadalupe bass, once the female has laid eggs in the nest (2,000 to 43,000) she is chased away by the male who then guards the precious eggs.

The young, called fry, hatch in five to ten days and remain in a school. Male largemouth bass continue to guard their fry for several days after hatching. Fry feed primarily on zooplankton and insect larvae. At about two inches in length they become active predators. Adults feed almost exclusively on other fish and large invertebrates such as crayfish.

Largemouth bass were originally distributed throughout most of what is now the United States east of the Rockies, with limited populations in southeastern Canada and northeastern Mexico. Because of its importance as a game fish, the species has been introduced into many other areas worldwide, including nearly all of Mexico and south into Central and South America.

This fish prefers clear quiet water with aquatic vegetation, but survives quite well in a variety of environments.

It is usually common or abundant wherever populations have been established. Micropterus salmoides salmoides is native to all natural waters in Texas, except in some parts of the Panhandle. The Florida largemouth bass has been extensively stocked in the state because of its propensity to produce more trophy-sized individuals.