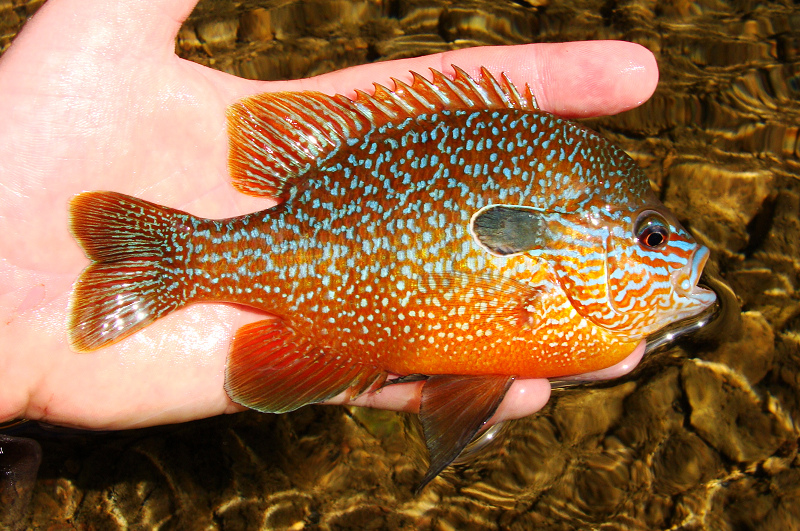 Because of its small size, the species’ importance to anglers derives in three ways. Since they are relatively easy to capture with simple, natural baits such as earthworms, longears are an important species for young anglers with little experience.

Like most sunfish, they provide more than enough fight for their small size. Longears may feed on the surface, providing the fly fishermen with a challenge, and finally, they are often a prized bait fish for trotliners.

Longear sunfish are primarily found in small streams and creeks. Like other sunfish they are often associated with vegetation, avoiding strong currents by inhabiting pools, inlets, and waters off the main stream channel. Spawning occurs throughout late spring and early summer.

Males scoop nests out of gravel bars. Females are enticed to lay their eggs on a particular nest by a male who swims out to meet her, swimming around her rapidly and displaying his brilliant spawning colors.

After the eggs have been laid, males chase the females away and guard the nest vigorously despite their small size, chasing away all intruders. Males may continue to guard the nest for a week or more after hatching, until larvae have dispersed. Insects and even small fish become part of the diet as fish approach adulthood. Longear sunfish rarely exceed six inches in length.

Longear sunfish are restricted to freshwater areas west of the Appalachian Mountains. Scattered populations occur as far north and west as southern Quebec and Minnesota, and as far south and west as north central Mexico and New Mexico. The species is found throughout Texas except for the headwaters of the Canadian and Brazos rivers.