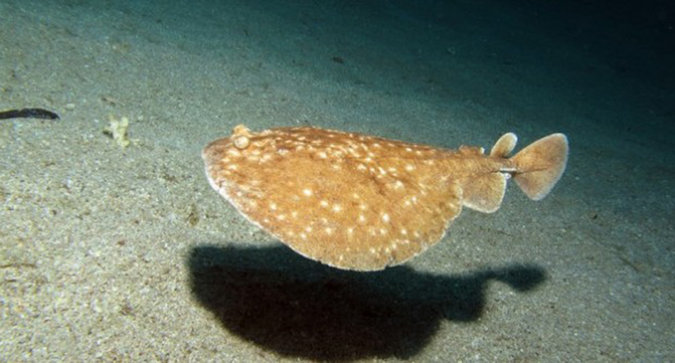 The southern flounder, Paralichthys lethostigma, is the largest of more than 25 species of flatfishes found in Texas coastal waters. It is highly prized as both food and a recreationally harvested fish and accounts for more than 95 percent of the flounder harvest in the state. Southern flounder occur from North Carolina to the mouth of the Rio Grande and southward into Mexico. They are usually found west of the Mississippi River.

All flatfishes, including the southern flounder, are compressed laterally and spend most of their life lying and swimming along the bottom on their side. In the case of southern flounder, the left side is always the “up” side; in other species, the opposite is true.

The flounder is wonderfully adapted for its way of life. Both eyes in adults are on the “up” side of the head and the pigmentation of the upper side of the body can be varied to match the surrounding environment. A small body cavity and the absence of air bladder aid the flounder in maintaining its position on the bottom.

Adult southern flounder leave the bays during the fall for spawning in the Gulf of Mexico. They spawn for the first time when two years old at depths of 50 to 100 feet. The eggs are buoyant.

After hatching, the larval fish swim in an upright position and the eyes are located on opposite sides of the head. As the young fish grows, the right eye begins to “migrate” to the left side of the head. When body length of about one-half inch has been attained, the eye migration is complete and the fish assumes its left-side-up position for life.

The young fish enter the bays during late winter and early spring. At this time they are about one-half inch in length and seek shallow grassy areas near the Gulf passes. As growth continues, some will move farther into bays. Some will enter coastal rivers and bayous.

Small flounder grow rapidly and may reach 12 inches in length by the end of their first year. Males seldom exceed 12 inches, but females grow larger than males and often reach a length of 25 inches. Most flounder caught by anglers are females between 12 and 16 inches long, weighing from one to 1 1/2 pounds. The minimum length for harvest is 14 inches. These fish are in their second year of life. The largest recorded southern flounder in Texas, 13.0 pounds, was taken in February 1976 from Sabine Lake.

Juvenile flounder feed mainly on crustaceans, but as they grow fish become more important in their diet. Adult flounder enter the shallow water at night where they lie, often partially buried, and wait for prey. Empty depressions where flounder have lain are called “beds.”

Although most of the adults leave the bays and enter the Gulf for spawning during the winter, some remain behind and spend winter in the bays. Those in the Gulf will reenter the bays in the spring. The spring influx is gradual and does not occur with large concentrations that characterize the fall emigration.

Flounder are taken by rod and reel or by gig. When fishing with rod and reel, light tackle offers both the greatest sport and best chance for catching flounder. Both artificial lures and natural bait can be used. Over barren bottoms, leaded plastic worms (worm jigs) are often very effective. In heavily vegetated areas, shallow-running spoons are best.

Flounder prefer live to dead bait. Live shrimp retrieved slowly along the bottom often produce excellent results. Killifish (referred to locally as mud minnows) fished in a similar fashion, is good bait. These fish can often be taken in large numbers with the cast or minnow seine.

Although many are taken by rod and reel, “floundering” or gigging offers the best challenge for this species. The flounder is vulnerable to this technique because it often enters the shallows at night to feed. Both the skills of the angler and the hunter are called for here.

Lanterns are used in searching for flounder and gigs ranging from single-pronged to modified hay forks are used to spear the fish. The anglers wade quietly along the shallows looking for flounder. Once the flounder is within the light from the lantern, normally it will not move, affording the fisher a chance to “gig” the fish. Although this sounds like a sure-fire method, many fish are missed because they go undetected until they swim away or because of inaccurate gigging by an overanxious angler.

The more sophisticated flounder fisher may mount his lanterns (or battery-powered lamps) on the front of a flat-bottomed skiff. The skiff is then poled through the water in search of fish or is pushed by a small air motor. Floundering from a boat is much easier than wading. It allows the angler to cover more area and search bottoms that are too soft for wading.

When and Where to Catch

Although flounder can be taken by rod and reel in almost any portion of the bay, it is more often productive to fish around jetties or oyster reefs that extend from shore into the bay. Flounder do not swim continuously so they tend to accumulate in such places in their search for food. During the fall, when flounder are moving to the Gulf for spawning, the best catches are made in the channels and passes leading to the Gulf. During the spring, wading anglers work the edges of channels, such as the Intracoastal Waterway, as the fish are moving back into the bays.

Floundering is best during the migration from October to December. Hundreds of lanterns can often be seen in and around the pass areas during this period, as the fishers wade through the shallows in search of fish.

During the spring and summer the best catches with gigs are made in the back bays. Areas with cord grass (Spartina alterniflora) along the shoreline are good producers, and a bottom that is slightly silty or muddy generally is better than a hard sand bottom. The mouths of small bayous and sloughs often yield flounder.

Since water clarity is very important to the success of any floundering trip, floundering should be done on calm nights. When fishing on windy nights, anglers should try to work small protected bays and shorelines.

The best catches are made during an incoming tide and on dark nights as opposed to moonlit nights. However, do not hesitate to flounder on an outgoing tide. During a falling tide trying farther offshore in water one to two feet deep or around offshore sandbars is often more productive. Avoid nights when the tides are abnormally high.

Stingrays also frequent the shallows at night. They are flat and can sometimes be mistaken for a flounder or stepped on by the unwary. The inexperienced flounder fisher should make certain of what he has gigged before retrieving it. If in doubt, simply hold the creature on the bottom with the gig and wait for the water to settle before attempting to retrieve your catch. A multi-pronged gig is helpful in such cases, because the catch can be lifted unassisted from the bottom.

The flounder’s reputation as table fare is unsurpassed in Texas. Remember that the quality of any seafood is largely dependent on how it is handled between capture and preparation. Remove the viscera and gills from the flounder and place the fish on ice as soon as possible. Cleaning beyond this point depends on how the fish will be cooked.

Flounder can be prepared in many ways. Broiling the fish with butter, lemon juice and favorite seasoning is popular. They also may be baked or fried. The gourmet likes his flounder stuffed with southern floundermeat.